a weekend in glasgow

​This weekend we were invited to by Sally of Hand Over Your Fairy Cakes to hang out with her, her boyfriend Keith and their two cats Chi and Harry at they pad in Glasgow.
We went up with fellow Brighton creatives and pals, Jam and Ali from hello DODO, Toby of i Like CATS and his boyfriend Kieran of Little Mountains. They are all regulars on this blog so you already know all about them!


Sally and Keith organised a crazily jam packed party of a weekend!

When we first arrived we went to the Kelvingrove Museum to see a baby dinosaur exhibition! It was all about their eggs and young and the answer to nearly all the interactive questions was ornithopod. 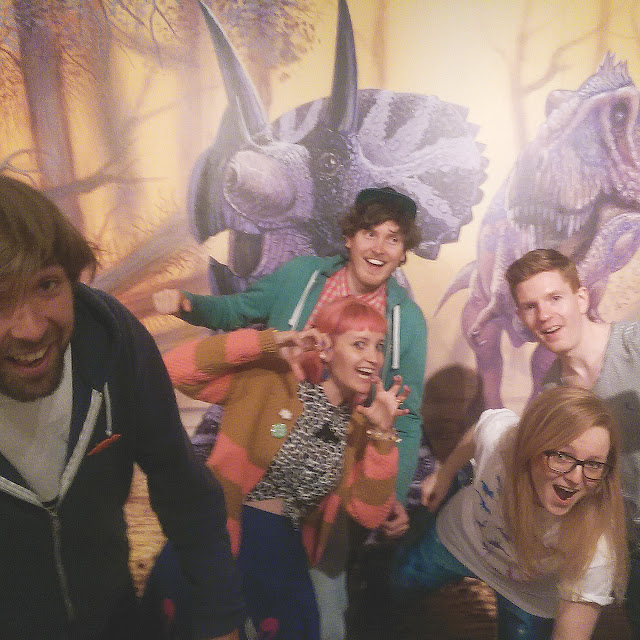 We then grabbed the biggest and most delicious ice creams and milkshakes and had a walk around the park. We deserved it, we'd done lots of thinking in the museum!

In the evening we went to a Cèilidh, I think probably the hottest Cèilidh in the world and I was pretty terrible at it, butttt it was so much fun all the same!

Saturday we had Butteries for breakfast, a local Aberdeen breakfast so I'm told, they were delish, if not ridiculously unhealthy, but all the best things are ey!

We went to Glasgow city centre to bumble around the shops, we had an awesome vegan lunch at Mono, which is also a record store! And played find the load bearing minion. (This drove everyone crazy as only Jacques has spotted it, and nobody else could find him)


Now most people have relaxing Sunday's but we decided to go to the Trampoline Park and it was THE MOST FUN EVER! We got to bounce for an hour, we played trampoline dodge ball and basketball and even jumped into a massive foam pit!

Being back in Brighton seems boring in comparison now! We can't wait for Sally and Keith to come and visit us so we can have just as much fun here!

PS most of the photos I have used in this blogpost are from HOYFC because all of mine are already on instagram :)